What are the symptoms of Ataxia?

Ataxia is commonly defined as a lack of coordination in body movements or a loss of balance which is not due to muscle weakness. Ataxia symptoms can be seen in a variety of voluntary motor tasks such as using fingers or hands, speaking, moving the eyes, eating, putting on clothes, and gait (ataxic gait). Ataxia is not a specific disease, it is a symptom of one or more underlying conditions that affect the nervous system. In a repeatable motor task like gait, symptoms of ataxia can become quite clear. The gait symptoms caused by ataxia differ considerably from those seen in Parkinson’s disease, spasticity in the legs or orthopedic abnormalities.

What is Ataxic Gait?

Ataxic gait is often characterized by difficulty walking in a straight line, lateral veering, poor balance, a widened base of support, inconsistent arm motion, and lack of repeatability. These symptoms often resemble gait seen under the influence of alcohol. 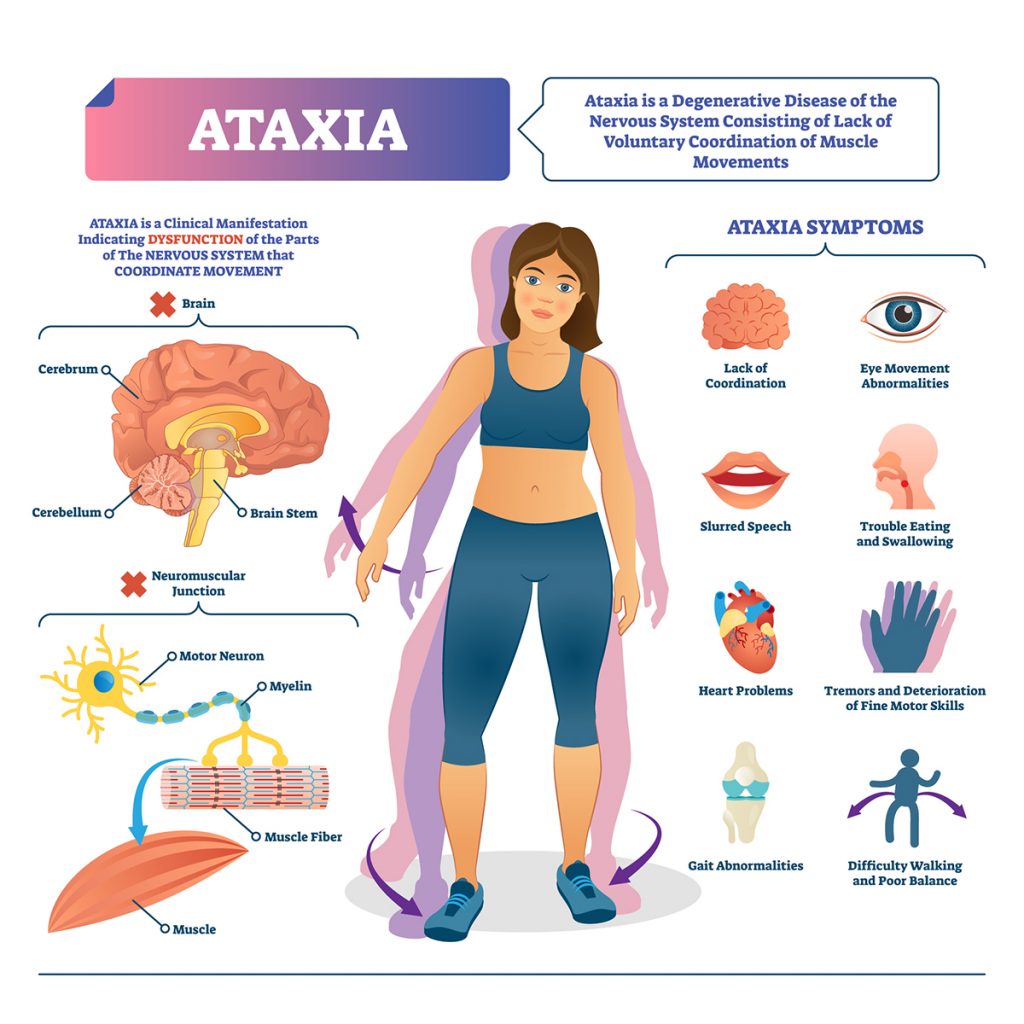 Ataxic gait can be caused by abnormalities within the brain, spinal cord, and peripheral nervous system. When caused by issues with the cerebellum, gait deviations resulting from ataxia have distinct features. Holmes(1) has defined cerebellar ataxia as a combination of dysmetria, dyssynergia, dysdiadochokinesia, dysrhythmia, and intention tremor.

The cerebellum sends signals throughout the brain that regulate fine motor movement. When cerebellar neurons are damaged, the cerebellum has difficulty integrating information from the rest of the body and brain. As a result, coordinating balance, posture, and smooth muscle activity are difficult, clearly impacting gait function.

Cerebellar disorders can be caused by hereditary ataxias, such as Friedrich Ataxia, and acquired conditions like Multiple Sclerosis, cerebellar strokes, traumatic brain injury, and long-term alcoholism. The similarity of ataxia to inebriation is no coincidence, as alcohol disrupts the main nerve cells in the cerebellum.

How to Quantify Ataxia

While symptoms of ataxic gait stemming from cerebellar dysfunction can be observed, it is important to quantify these gait deviations to improve their understanding. The common deviations seen in ataxic gait are a widened base of support, cadence, missteps in tandem gait, increased step variability, and poor balance. Compensations for ataxia may include shortening step length and shuffling.

The measurement of temporal spatial gait metrics is a common way to quantify the deviations caused by ataxia. This allows for the quantification of the widening of the base of support by measuring the stride width, and the overall variability in step to step measures by using a global score, such as the eGVI or looking at the step to step variability of measurements such as step length, stride time, stance time, and swing time. Improved characterization and understanding of the gait deviations caused by cerebellar ataxia can lead to improved treatment and earlier diagnosis of these disorders.