Measuring gait, the systematic analysis of locomotion, provides a means by which underlying health problems are discovered and clinical interventions are designed and measured. Gait analysis systems can assist clinicians in identifying abnormalities and asymmetries in gait to provide a window to study disease, monitor patient progress, and design treatment interventions for a multitude of conditions.

Gait analysis has played a key role in the advancement of the surgical treatment of children with cerebral palsy. Gait analysis systems have proven their worth as a tool for the study of neuromuscular disorders (especially Parkinson’s Disease), orthotics, assistive devices, the study of athletic injuries, and the treatment of amputees.

The Limitations of Observational Gait Analysis

The gait cycle is divided into stance and swing phases. Stance phase marks the beginning of the gait cycle when the heel strikes the ground. As body weight shifts over the stance limb, foot flat occurs at approximately 10% of the gait cycle; heel off at 45%; and toe off at 60%. Swing phase then begins and continues until the next gait cycle starts.

When no dysfunctional factors impact gait, this cycle operates at a virtually unconscious level. When dysfunctional neuromusculoskeletal or other pathological states are present, conscious or unconscious modifications to normal gait may appear.

With observational gait analysis (OGA), a trained observer can recognize many gait deviations during stance and swing phases. But OGA has its limitations because the classic division of gait into heel strike, foot flat, heel off, and toe off is not sufficient to describe some disabilities. For example, when analyzing the gait of a person with a neuromuscular impairment, there may be no heel strike or heel off – the entire stance phase may be spent in foot flat. Additionally, events occurring faster than 1/12 of a second (83 milliseconds) cannot be perceived by the human eye. This is where gait analysis systems help the clinician understand the complexity of a patient’s gait cycle.

“The problem with observational gait assessment (OGA), however, is that it is relatively subjective in nature and it has been suggested that this subjectivity may lead to poor validity, reliability, sensitivity, and specificity when compared to the more objective instrumented gait analysis” (Krebs, Edelsteinand Fishman, 1985; Eastlack et al, 1991; Salehand Murdoch, 1985; Goodkin and Diller,1973; Keenan and Bach, 1996.)

“Sensitivity and specificity are essential qualities of a clinical gait assessment tool. Sensitivity relates to the tool’s ability to identify true and clinically relevant deviations from normal gait or actual changes in gait, for example, due to an intervention. Specificity refers to the ability of the tool to correctly identify normal gait and indicate no change in gait from a previous gait assessment. The ideal tool is highly sensitive, so it correctly detects a high percentage of all those individuals whose gait is abnormal and correctly detects genuine changes in gait. It is also highly specific, so it correctly detects a high percentage of those whose gait is normal as being normal and detects no change in gait when it has not changed. Importantly, however, the change in gait must be considered alongside a genuine measure of the same change in gait, which has been measured using…quantitative gait analysis.”

The second study tested the accuracy of OGA in a clinical Traumatic Brain Injury (TBI) population. It found that an experienced group of clinicians had an average error of 14.5-36.9% for 6 standard temporal-spatial gait variables when comparing to a validated instrumented analysis.

“In this sample of adults with severe TBI, OGA appeared to have low accuracy with a high percentage of disagreements and marked variability in performance. Although experience does seem to produce a somewhat more accurate observation, inter-item correlations were low, indicating that an accurate observer on one variable was not predictably accurate across variables. Further, considerable variability in the accuracy of OGA was identified for each gait variable and for each observer…The inaccuracy and variability in accuracy of OGA for gait variables following TBI indicates the need for objective assessment of gait in clinical practice.
“Our results suggest that a high inaccuracy rate could potentially have a negative impact on clinical decision-making. Key gait abnormalities may be missed by OGA, leading to the underlying cause being lowly prioritized for treatment. Conversely, variables identified by OGA as abnormal, which are in fact within the limits of normal human variability, may be highly prioritized for treatment.

Protokinetics’ Gait Analysis System includes the Zeno Walkway Mat and proprietary PKMAS software. This system helps clinicians and researchers identify deviations in gait function to better assess the baselines and progressions of many neurologic, pediatric, and geriatric conditions; the function of orthotics and prosthetics; knee and hip replacements; and injury rehabilitation. 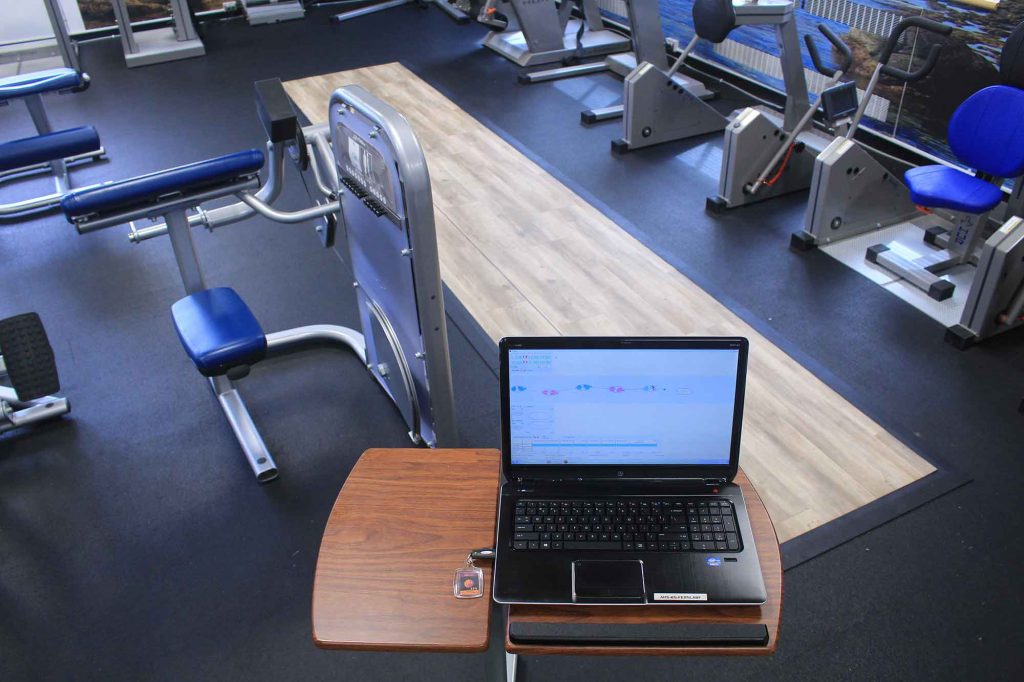 The Zeno Walkway System is a portable, pressure sensitive walkway which measures temporal, spatial, and pressure parameters during tasks such as static standing, straight walking, with and without assistive devices, and a variety of other maneuvers. Available in a variety of widths and lengths, it is easily set up in nearly any clinical environment.

PKMAS software, when used with the Zeno Walkway System, captures temporal, spatial, and pressure measurements. This includes forward and backward walking, transitional movements, static and dynamic balance, running, jumping, and hopping, TUG, 4-square step test, and Fukuda. Raw, clinically relevant data can easily be exported as text or to an Excel spreadsheet and viewed alongside videos and custom visuals.

Our gait analysis software and equipment is designed for ease of use by both the patient and clinician and allows for quick analysis and comparison to monitor conditions and detect abnormalities.

The combination of a careful clinical assessment and gait analysis can be a powerful tool for the clinician to measure gait abnormalities. Many kinds of gait analysis systems are available and what the clinician measures on a regular basis should determine the type of system they purchase.